Air cargo volumes returned to pre-covid levels in April after a drop off in March while the overall market remains strained, according to the latest statistics from CLIVE Data Services.

Figures from the data provider show that cargo tonnages increased by 1% in April compared with the same month in 2019 (pre-Covid) following a decline of 3% in March. Against last year volumes are up 78%.

In its monthly market update, CLIVE said the second half of April 2021 showed particularly strong year-over-year growth, up 6%.

Niall van de Wouw, managing director of CLIVE Data Services, said: “The air cargo market shifted gear again in April. The month-over-month change from -3% to +1% is quite a jump, but a dynamic load factor of 71% represents a tremendous strain on the air cargo system.

“This lack of bandwidth capacity-wise is being exacerbated by the fact there is no summer schedule based on passenger demand, which is contributing to the high rates being reported in the market.

“Airlines operating ‘preighter’ services need these rates in order to operate cargo-only operations because the margins on these services are very thin.”

IATA figures released this week also pointed to a slowdown in March, although its figures still showed growth for the month as they are based on tonne kms and would have been affected by the strength of volumes exported over long distances from Asia.

Looking at some of the main trades, CLIVE data showed that April volumes from China to Europe were 18% higher than in 2019 and the load factor reached 95%.

And despite a 10% drop in volumes from Europe to North America compared to 2019, a fall in capacity of around 40% on this lane pushed the dynamic load factor to 87%. 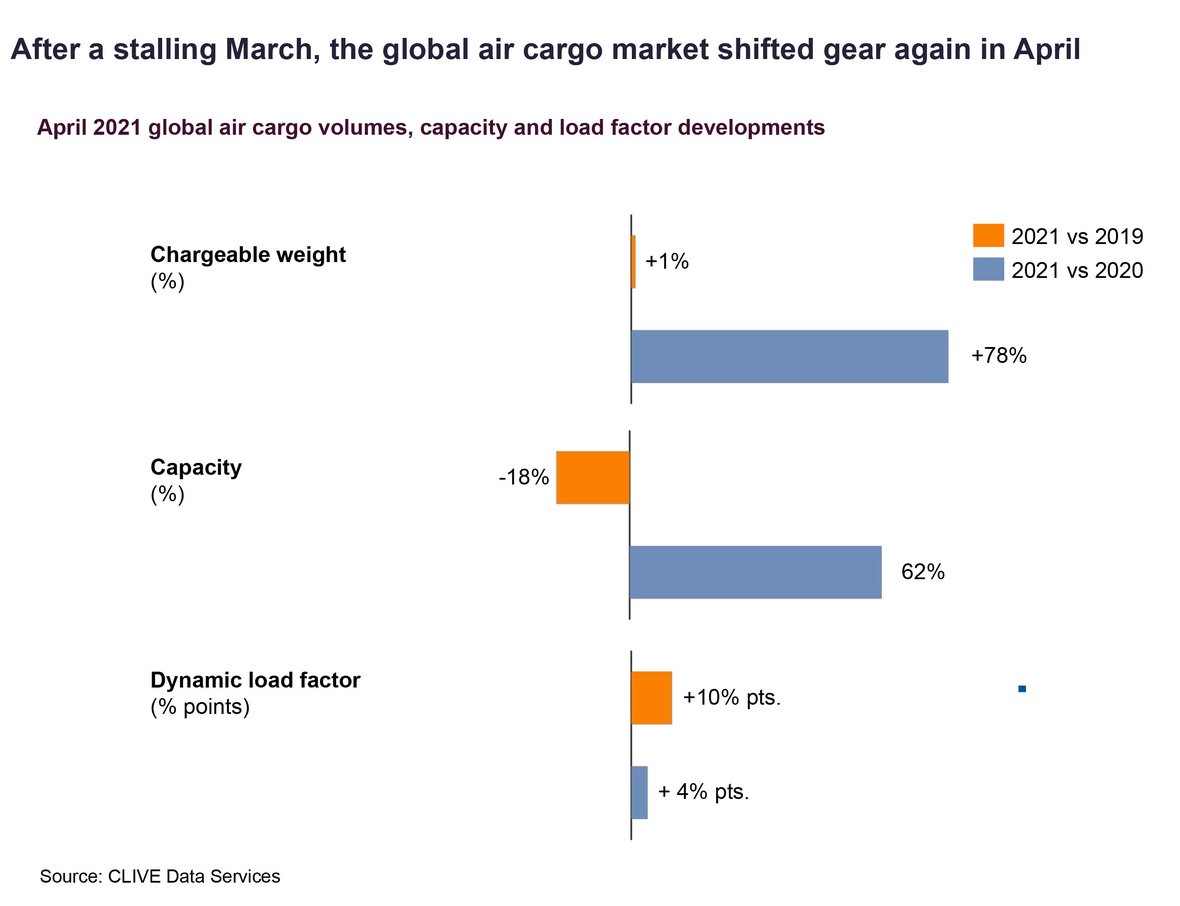 The high load factor has helped push up rates.

Gareth Sinclair of rate data provider TAC Index said: “The BAI (Baltic Air Freight Indices) increased by almost 17% in April over March largely driven by China (HKG & PVG) with growth around 30% but London Heathrow also saw an improvement on three out of four indices although at more modest levels (~3%) building on similar growth levels in March. Frankfurt, Chicago and Singapore origins all saw declines over March levels. There continues to be a dynamic market environment with operational crewing and permits continuing to impact some carrier operations.”

TAC Index said that rates varied from trade to trade. For example, China/Hong Kong to the US ended April on a high for the year of $8.56 per kg, with prices up 60% compared with March.

China/Hong Kong to Europe also improved but not to the same extent as to the US, with prices reaching $4.89 per kg. This is down 31% compared with a year ago and up 92%.

From the US to Europe April average rate stood at $1.74 per kg ” a good week-on-week improvement after four weeks of decline from this year’s high of $2.13 on March 22″.

During the month Cathay Pacific had to reduce cargo capacity from Hong Kong due to new crew quarantine rules (since relaxed) and this is expected to have had a particularly strong impact on US routes.

Sinclair concluded: “In summary, the airfreight market continues to be strong, particularly CN/HK to US, and may continue, at least in the short term, with demand strengthening as countries relax lockdowns and subdued passenger travel continues to impact capacity.

“With the easing of Hong Kong quarantine rules for crew, Cathay Pacific, for example, are looking to restore their full market presence as soon as possible, which may dampen pricing.”