Air cargo capacity quickly recovered to pre-Christmas levels after a temporary dip over the break, according to the latest figures from Accenture's Seabury Consulting.

The latest Seabury figures show that capacity across express carriers, freighter carriers and bellyhold operations dipped in the last week of the year (see chart) but was not as large a drop off 2019 levels and made a quick recovery.

“With demand still strong, the end-of-year traditional capacity drop in 2020 was less pronounced than it was at the end of 2019, with airline/express freighters operating 30% more capacity than last year,” Seabury said.

From December 28 to January 10, freighter capacity was up 33% year on year, express capacity gained 27% and bellyspace was down 61%.

Overall air cargo capacity was down by 16% on a year ago, which is an improvement on the dip of around 30% registered at the peak of the Covid-related capacity decline in April-May.

However, figures vary by trade lane. On the transpacific, cargo capacity on January 10 was actually 2% up on a year ago, while from Asia Pacific to Europe it was down by 21%.

Meanwhile, average air cargo rates have come down since the end of the year.

Figures from the Baltic Exchange Air Freight Index (BAI)show that average prices from Hong Kong to North America ended last week at $5.92 per kg compared with $7.66 per kg in the last week of 2020.

From Hong Kong to Europe average prices last week stood at $4.23 per kg compared with $5.38 per kg at the end of last year. 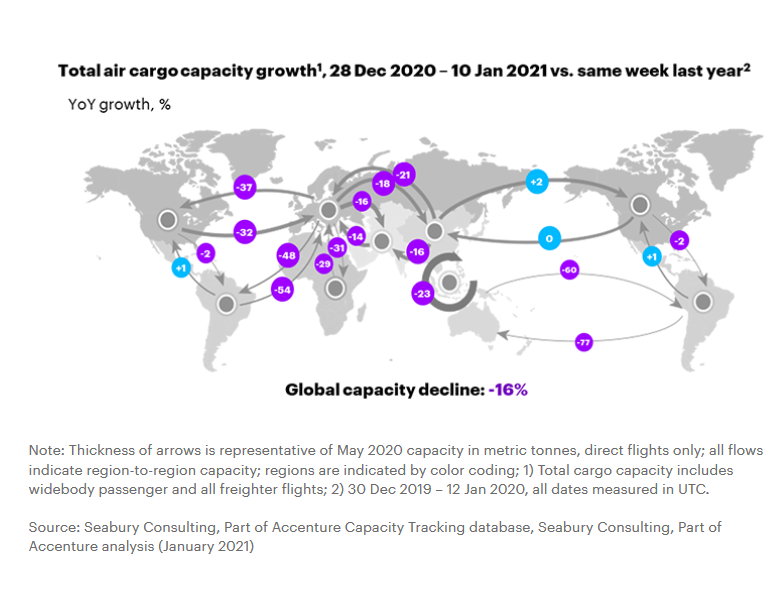 The post Carriers quick to return cargo capacity to the market after Christmas appeared first on Air Cargo News.